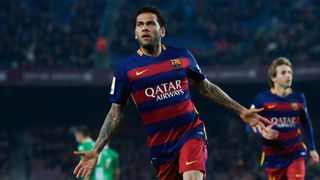 Barcelona defender Dani Alves insisted he was "not angry with anyone" despite making an expletive-laden rant against the media during a successful week for the Catalan giants.

Alves hit out at what he called "f****** rubbish" from the Spanish press after Barca's 4-1 Copa del Rey win over Espanyol in midweek, and he gave a surprise follow-up interview after the subsequent 4-0 win over Granada in La Liga on Saturday.

"I am not angry with anyone," he said. "I have only my opinion to express, and I just ask you to respect me.

"You should talk more about football and less about things you should not.

"We are in a risky profession, and it is very important that we shouldn't speak of certain controversies."

Alves was called upon to retract his remarks by the Spanish Sports Press Association, but the full-back indicated that he would stand by his comments.

He said: "They [the press] defend what they think and I defend my opinion."