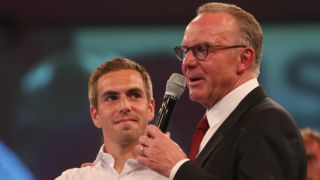 Germany suffered a humiliating group-stage exit in Russia after defeats to Mexico and South Korea, becoming the third defending champions in a row to suffer such a fate after Italy in 2010 and Spain in 2014.

Speaking to reporters on Friday, Rummenigge, who won 95 caps in a 10-year career with the national team said: "The DFB is really only full of amateurs.

"I am not convinced that there are the right approaches in place [to deal with crisis], but it does not surprise me either.

"I think Philipp Lahm is a perfect match for the DFB. It might be an interesting solution to install Philipp Lahm as vice president there to give the bureau a bit more professionalism."

Ozil has borne the brunt of the criticism for Germany's failure, something Rummenigge believes is harsh on the Arsenal playmaker.

He added: "Mesut Ozil is the only scapegoat? Sorry, but I think that's a bit far-fetched."

Mesut Ozil created seven chances against South Korea - all from open play; the most by any player in a single game at the 2018 World Cup so far.No goals to show for it. June 27, 2018