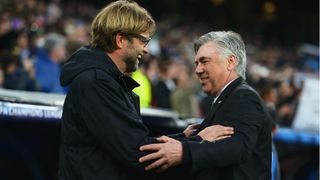 Jurgen Klopp has backed Carlo Ancelotti to bounce back from the disappointment of losing his job at Bayern Munich.

The experienced Italian coach lost his job at the Bavarian club on Thursday following a 3-0 Champions League defeat to Paris Saint-Germain.

Klopp - who won the Bundesliga title twice with Borussia Dortmund before arriving at Liverpool - has been mentioned as a possible candidate for the vacancy.

While the German is tied down to a long-term contract at Anfield, he was still asked about the developments at Bayern during his Friday press conference.

"Not a lot of things in this business can surprise me any more, to be honest," Klopp told the media.

"I watched the game against PSG. This is how football is – individual quality can decide games, and that’s how it was on Wednesday.

"At the end, though, it wasn’t one game. It was a development that the Bayern bosses didn't like too much. That’s why they made the decision, I think. I've no real clue as to why exactly they did it though.

"Carlo is a very, very experienced manager. I'm sure he hasn’t lost his football knowledge overnight.

"Sometimes, however, two sides don't fit together. If Bayern believe they have a better future with another manager, then congratulations. If Carlo wants to carry on, he will find a fantastic club and show what kind of manager he is.

"But there are bigger problems in the world at the moment than Bayern Munich sacking Carlo Ancelotti."