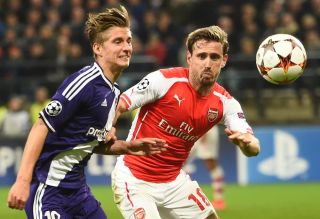 Praet, 20, was named in Marc Wilmots' squad for the international break - which sees the Red Devils tackle Iceland in a friendly on Wednesday before a Euro 2016 qualifier against Wales on Sunday.

Both games are at King Baudouin Stadium in Brussels, the city in which Praet is based with his Belgian Pro League side, however he is unsure if he will be deployed by Wilmots.

"I'm very excited. It's the first time they called me up," Praet said.

"So for me it's already a big experience to be in the team.

"Maybe I will get some minutes, maybe not, we will see but for the moment I'm just really happy to be in the selection."

Praet watered down comparisons to Barcelona maestro Andres Iniesta, claiming he has a long way to go to earn the respect of the Catalan mainstay.

"Yes it was three or four years ago a team-mate of me said it [the comparison] after I played my first game in Anderlecht for the first team," he said.

"So now they sometimes say it but it's nice that they compare me with Iniesta, but Iniesta is a top player and I'm just starting.

"So I have to improve a lot to become once like Iniesta."

Southampton defender Toby Alderweireld is set to add to his 41 caps, and said he had no hard feelings towards Atletico Madrid coach Diego Simeone - who left the Belgian out of their starting XI for the UEFA Champions League final, before coming on as a substitute.

Alderweireld then made the loan switch to St Mary's, where he has helped Southampton move to second in the Premier League table.

"Well I think I had a good season [at Atletico Madrid], played 25 games I think and played in the final of the Champions League, so I had a very good season and learned a lot," the 25-year-old said.

"Of course the coach [Simeone] chose for two other players and they played really well so I couldn't do anything about it, we had a fantastic season.