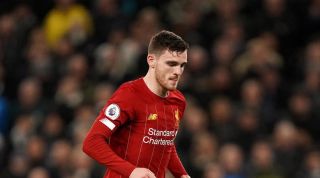 Andrew Robertson has praised Liverpool’s midfielders for their role in the team’s superb season.

Jurgen Klopp’s side will move 25 points clear at the top of the Premier League table if they beat Watford on Saturday.

The Reds, who are closing in on their first title since 1990, have scored the most goals in the division and conceded the fewest.

But Robertson believes the players in the centre of the park deserve as much credit as anyone for the team’s success.

"Trent [Alexander-Arnold] has said we believe that we can keep clean sheets and I think the midfield is key to that," he told Sky Sports.

The manager wants us to get forward, he wouldn't be happy if me and Trent were just stood on the halfway line defending and the back four just stayed where they are. It's up to us to take the opportunities to get forward when we feel it is right.

"We have people like Fabinho, Hendo [Jordan Henderson], Milly [James Milner] and Gini [Wijnaldum] who will cover for us, or sometimes they go and we cover for them.

"It's all about getting the balance right. Different games see different spaces open up and on the wings there is sometimes lots of space that we need to capitalise on.

"It's no use to us if we're just sitting back and focusing on the clean sheet because we know we can create chances and we've proven that."

Robertson and Alexander-Arnold are the Premier League's most creative full-backs, having registered a combined 19 assists this term.

And the Scotland international insists there is only healthy competition between the pair.

"I don't think it's about advice and we're not in a position where we'll give each other advice. We'll have banter after games if somebody gets an assist and the other doesn't, or somebody misses a big chance from one of our crosses," he added.

"I wouldn't say it's a rivalry because if Trent gets an assist I've never felt like 'uh, he's miles ahead of me' or anything. It's for the good of the team and we're always the first to celebrate with each other when we do assist.

"After the game it's never more than a bit of laughter. At the end of the day if there is a bit of competition there it's helping the team and we've proved that over the last season and a half."