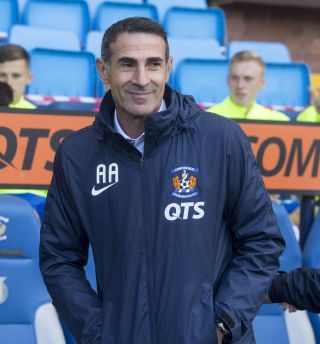 Angelo Alessio has confessed Kilmarnock’s transfer woes have left him struggling to put his own stamp on his new side.

The Italian has so far only added goalkeeper Laurentiu Branescu and midfielder Mohamed El Makrini to his squad having lost nine players over the summer.

And in a candid admission, he revealed the lack of new faces have made it difficult to implement the style that helped bring success to Juventus, Italy and Chelsea during his time as Antonio Conte’s right-hand man.

But Alessio – who has found himself already under pressure just two games into his Killie reign following his side’s disastrous Europa League exit at the hands of Connah’s Quay Nomads – insists he will not shy away from trying to match the record-breaking exploits of his predecessor Steve Clarke last term.

Speaking ahead of Sunday’s Ladbrokes Premiership opener against Rangers, he said: “Our objective is to reach our best position in the top of the table and I think we can.

“For me it is a big challenge (to improve on what Steve Clarke achieved). At the moment it is difficult for me to do my style of football for many reasons.

“For me it’s OK. I want to fight and work hard every day. But at the moment it’s difficult because we don’t have (enough) good players in some roles.

“At the moment we have these players. For this reason I’m adapting to these players because I don’t have another solution.

“It’s not frustrating because it’s difficult in this summer market to bring in new players.

“Every team wants the same players. I’m confident and the club is working hard but it is not easy.

“It has been difficult to bring in new players and to complete our team. In some roles we don’t have another solution. We have only Eamonn Brophy for a striker.

“It’s important for us to understand this. Last season we had eight loan players. The club are working hard to bring in new players but we have had difficulties.

“But eight players less is too much.

“We need a striker because there is only Brophy. We need a winger for the left and the right and maybe another centre-back. You know the situation. For me it’s clear and I think it’s clear for you.

“I work and for me it’s no problem. The manager is always under pressure. It’s normal.”

Despite his troubled start to life in Ayrshire, Alessio insists his team are ready to face Steven Gerrard’s men this weekend.

He said: “We are working well, we’re ready for this game. We know Rangers is a tough game.

“They are a big club with a big budget and some expensive players. But now we are ready. We have worked very well in this period after Connah’s Quay and I’m expecting a good reaction.”