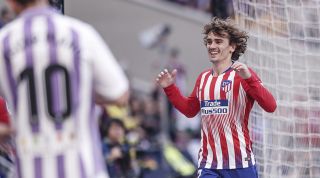 Barcelona’s dismal Champions League collapse against Liverpool convinced the La Liga champions to swallow their pride and move for Antoine Griezmann, according to Spanish reports.

Griezmann, in conjunction with Atletico Madrid, announced that he would be leaving the Rojiblancos this summer after five years with Diego Simeone’s side.

“I wanted to tell you that I’ve made the decision to leave to experience new things and have new challenges,” he said. “It’s been very hard for me to take this path, but I feel that it’s what I need.

“I wanted to thank you for all the love you’ve given me in these five years, in which I’ve won my first important trophies with a club. They were incredible moments that I will always remember. The truth is you’re in my heart.”

Barcelona moved for the 28-year-old France international last summer, only to discover that Griezmann was turning them down to stay at Atleti via a live television programme called The Decision.

Griezmann’s handling of the situation annoyed Barça, but according to Marca, the Camp Nou club have decided that a second Champions League collapse in succession cannot stand and will make a move to trigger his €125m release clause this summer.

La Liga president Javier Tebas admitted on Spanish radio that he hopes Griezmann will remain in Spain and declared that paying the clause would be the only way for a club to sign the player who scored 15 league goals in 2018/19.

Barcelona will likely sell players to free up funds for a move, and Philippe Coutinho is considered most likely to leave just a year-and-a-half on from his £146m transfer from Liverpool – although the Reds will reportedly lose £17.35m of that if the Brazilian is sold this summer.

Barça face Valencia in the Copa del Rey final on May 25.