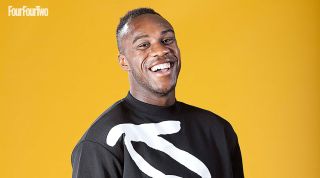 The former Tooting & Mitcham, Southampton and Sheffield Wednesday flyer joined the Hammers from Nottingham Forest for £7 million last September, but Antonio had to bide his time for opportunities at Upton Park.

And having finally broken into Slaven Bilic’s first-team plans at the turn of the year, he cemented his place in style, ending the campaign with nine goals in 32 outings, including strikes against Liverpool, Spurs and Manchester United.

Speaking exclusively in the September 2016 issue of FourFourTwo magazine, Antonio says: “My personal highlight? Probably getting the winner against Spurs because it was a massive game and how important it was to us.

“Plus my first goal in the Premier League [against Southampton]. Still to this day I couldn’t tell you where that ball hit me.

“It just put me on the run and it kind of made me the player I am. It built my confidence and from there I didn’t look back. I just kept pushing on.”

Antonio’s versatility meant he was often asked to play out of position at right-back last term, a role he has already had to fulfil this season in the Hammers’ Europa League third qualifying round first-leg defeat to Domzale in Slovenia.

But the 26-year-old believes being deployed in defence will help him inflict more damage on opposition backlines when he is finally pushed further up the pitch.

“I think it’s built me massively as a player. I’ve now learnt what defenders expect and how to be one. I now know where defenders need to be, where they don’t like attacking players to be going.

“As an attacking player, I can register that and put it in my game.

“I’m hoping that I can be back in my right position because that’s where I’ve played my whole life.

“When I pick up the ball now at West Ham, the fans shout: 'Go, run, run'. It's just one of those things I've always been able to have, running at people and beating players. It's definitely a good attribute to have. As soon as I get the ball, I just hear the fans roar. You get something that goes inside your stomach, and it just makes you run and take people on and go. It gives you that massive lift and belief behind you.

“I’ve never thought or dreamt that I could actually be played as a defender. I’ve been one of the best players in the Championship. Now, hopefully, I can turn myself into one of the best wingers in the Premier League.”

Read more from Michail Antonio in the September 2016 issue of FourFourTwo. Accompanied by our 100-page Season Preview - rating 128 teams - the magazine features the 81 things we want from the new season, including interviews with Demarai Gray, Javi Martinez, Neymar, Roberto Firmino, Brendan Galloway, Kelechi Iheancaho, Glenn Murray, David Wagner, Sheyi Ojo and Alex Iwobi. Plus, we go One-on-One with Nemanja Vidic, meet footballers' yes men - the player liaison officers who cater to the stars’ whims - and the Wiki geeks - the men who make it possible for fans to use Wikipedia for their football info - as well as asking do team talks matter? The answer might surprise you. Go get it, then subscribe!