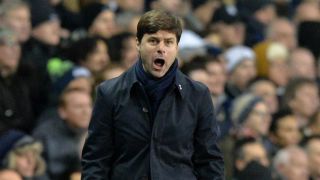 Tottenham head coach Mauricio Pochettino says the Premier League is so open that any team in the top 10 is capable of winning the title.

Just 14 points separate leaders Arsenal from 10th-placed Watford after 21 games this season, with the likes of Leicester City - who sit second only on goal difference - and Stoke City currently in the mix for Champions League qualification.

And Pochettino, whose side are fourth, seven points behind Arsenal, expects the title race to go right to the wire.

"For me, it is the toughest league in the world - it is very open," he said.

"Leicester, [Manchester] City, us and behind us, Liverpool, [Manchester] United, West Ham... it is a very open league and so far, all can happen.

"All the top 10 can have the possibility to win the league. You can guess who but there are a lot of games ahead."

Tottenham suffered a disappointing 1-0 defeat to Leicester at White Hart Lane on Wednesday.

Pochettino, who again insisted that star striker Harry Kane was not for sale, was frustrated by the result but insists one loss will not change his opinion of his team nor his plans for the transfer market.

He added: "It is true we missed a great opportunity to establish ourselves at the top. You feel disappointed but you need to carry on and keep working hard.

"But the way we played is nothing to worry about for the future. We cannot change after one result our plan and our view about our squad.

"I have explained a lot of times that if we find the right profile and the player that can improve our squad, we work hard for that. If we can add some player, we are open to it."