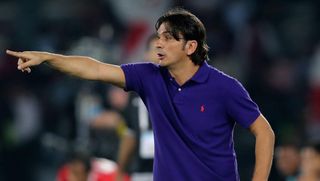 Jazira had been looking to keep the gap at four points following Al Ain's 2-1 victory over Al Nasr on Saturday, but Eric Gerets' side fell short to give the pacesetters another boost with just four matches left.

The match's only goal arrived in the 17th minute, as Santiago Tagliabue proved to be the difference, moving Al Wahda to within two points of the AFC Champions League spots.

Third-placed Al Shabab were made to battle for a 2-2 draw at home to Al Wasl, coming from behind twice and eventually securing a point with Edgar Silva's 75th-minute penalty.

At the other end of the table, Al Sharjah secured their top-flight status thanks to Saturday's convincing 4-1 defeat of Ajman, who themselves appear doomed for the drop as they remain 10 points adrift of safety with four games left.

Already-relegated Al Ittihad Kalba claimed only their third win of the season in a 1-0 triumph over Al Dhafra on Saturday, while Bani Yas drew 1-1 at home to Al Fujairah and Al Ahli beat Emirates 1-0.