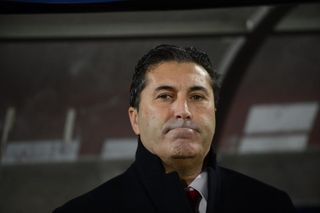 The 23-year-old striker netted his second goal of the season in the third-minute of stoppage time as Jose Peseiro's side beat Emirates 2-1.

Luiz Henrique had given Emirates the lead a minute before half-time, and they looked good value for all three points until Sebastian Tagliabue levelled on 72 minutes.

Things then went from bad to worse for the hosts when Omar popped up at the death to steal all three points for Al Wahda.

Elsewhere, Al Nasr moved into second place with their first victory of the campaign as they beat Al Sharjah 3-0 thanks to goals from Hassan Mohamed, Ali Al Ameri and Ivan Trickovski.

The opening two goals came before half-time as Al Sharjah struggled for the second week running and, when Trickovski applied the finish for the third goal, the points were assured.

Al Jazira missed the chance to join Al Wahda on six points as they were held to a 2-2 draw by newcomers Al Fujairah.

A double from Ali Ahmed Mabkhout appeared to have set Al Jazira on their way to a win but, after Hassan Yebda had halved the deficit, Boubacar Sanogo snatched a first point for the visitors.

Having seen their opening round match against Al Shabab postponed due to AFC Champions League commitments Al Ain began their season with a 2-0 win over Al Wasl.

After scoring 29 league goals in 2013-14, Asamoah Gyan needed just 36 minutes to open his account, and although Mohamed Ahmad was dismissed for two bookable offences, the 10 men held on.

Their winning margin was then doubled in second-half stoppage time as Miroslav Stoch struck his first league goal since moving from PAOK in Greece.

Al Shabab were rescued by two goals apiece from Mohamed Marzooq and Henrique Luvannor as they came back from two goals down to beat Al Ahli 4-2 in their opening game.