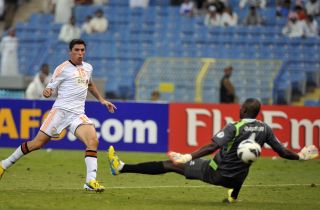 The 2009-10 champions remain unbeaten, but were held to a third draw in their last four games in the match at Ajman Stadium.

Sebastian Tagliabue got the visitors off to an ideal start when he opened the scoring after just two minutes.

However, in what was a thrilling encounter, Bakary Kone's quickfire double put the hosts back on top before Damian Diaz's goal looked set to send the sides in level at the break.

Abdulla Jasem scored the game's fifth goal three minutes before the interval, with the only strike of the second half coming five minutes prior the hour mark courtesy of Mohamed Al Shehhi.

Jasem went from hero to zero when he was dismissed in the 63rd minute, but it did not cost his side who held on to gain a point against the early leaders.

Al Wahda's slip-up allowed Al Jazira to close the gap to one point as they proved too strong for Al Nasr in a 3-2 triumph.

Ali Ahmed Mabkhoot's first-half brace put the hosts in charge and Manuel Lanzini added a third five minutes after the interval. Ivan Trickovski made life uncomfortable for the hosts, but Jazira held on.

Al Ain and Al Shabab also kept the pressure on the lead with victories against Emirates and Al Sharjah respectively.

Diaky Ibrahim's brace ensured Al Ain the points in a 2-1 victory at the Hazza Bin Zayed Stadium, while Al Shabab were involved in a six-goal thriller.

Wanderley scored Sharjah's two goals in their 4-2 loss, with Essa Obaid, Carlos Villaneuva, Henrique Luvannor and Azizbek Haydarov on target for the hosts.

Bottom side Al Ittihad Kalba were beaten 2-1 by Al Fujairah, while Bani Yas saw off Al Wasl by the same scoreline thanks to goals from Joan Verdu and Bandar Mohammed.