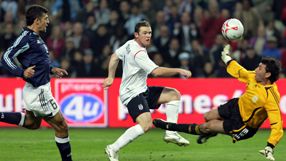 The arch rivals - who last met in Geneva in November 2005 with two late Michael Owen goals handing the Three Lions a dramatic 3-2 victory - were due to meet again in Copenhagen on February 8 ahead of England's Euro 2012 qualifier against Wales.

However, the South Americans have since had to pull out due to a problem with the date of the fixture.

England are still hoping to play a different opponent in Denmark, to ensure fans who have already made travel plans are not left disappointed.

"We are still looking to play in Denmark, on Tuesday February 8, and the opponents will be announced in due course," an FA spokesman said, as reported by The Guardian.

"The Parken stadium in Denmark is ideal because of the climate and it has a roof and is heated."

Argentina's decision to cancel the clash hinged on the game being switched to Tuesday February 8 from the Wednesday to comply with the commitments of the Danish national team.

Guillermo Tofoni, in charge of Argentina's fixture list, said there would not be enough time for the team to both travel and prepare if the game was on a Tuesday, but that the game against England would be rearranged.

"We are going to reprogramme the match with England. The two matches are still on. We already have the one in August 2013 for the 150th anniversary of the FA, at Wembley. We need to find a window for the first one,"  he said.

"February 8 was complicated for getting the players together, more so for us with them playing in different leagues. The English have them more concentrated."

Argentina could now meet Portugal at either Emirates Stadium or Old Trafford on February 9.

"I'm working on that. It would be nice with Portugal," Tofoni said. "It could be played in London but let's not rule out Manchester, with Cristiano Ronaldo and Carlitos Tevez."