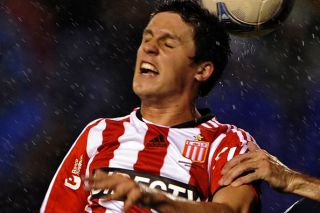 Guido Carrillo opened the scoring for the hosts in La Plata, scooping home a shot while on the ground in the ninth minute.

The home side were rocked by two quick yellow cards to left-back Jonathan Silva - who was dismissed on the half-hour mark.

Lanus fought back just prior to half-time, as Uruguayan forward Santiago Silva scored in the fifth minute of additional time.

It was a case of third time lucky for the visitors, as Estudiantes goalkeeper Geronimo Rulli denied two powerful shots before Silva's effort deflected off the custodian and into the net to send the sides into the half-time break level.

Substitute Victor Ayala then blatantly bundled over Leandro Desabato in the area to hand Estudiantes a chance from the spot, and Carrillo dispatched the penalty with power to ensure his side made it three wins from three.

Velez Sarsfield enjoyed a 3-0 home win over All Boys, with goals from Mauro Zarate, Jorge Correa and Ramiro Caseres.

Each of Godoy Cruz, San Lorenzo and Colon have six points, and all three have made it back-to-back wins after losing their season openers.

San Lorenzo were also on the road, and chalked up a 2-0 win over Argentinos Juniors, while Colon also had a 2-0 victory at Quilmes.

In eighth and ninth respectively, Belgrano and Tigre are the remaining unbeaten sides with a win and two draws giving them five points apiece.

Belgrano hosted Newell's Old Boys and fought back from a deficit for a 1-1 draw, while Tigre won 1-0 away at Racing Club.

Finally, Arsenal broke their points duck this season with a 2-0 road win at Olimpo.