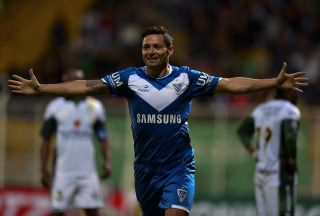 Mauro Zarate scored an impressive solo goal for Velez, as they continued Boca's poor start to the Torneo Final campaign, with the Buenos Aires giants slumping to their third loss after five rounds.

Colon trumped Rosario Central 1-0 on Saturday to stay top of the table but Velez remain in touch, two points behind, alongside Estudiantes, who drew 0-0 with Newell's Old Boys on Sunday.

At Velez's Estadio Jose Amalfitani, Zarate scored the only goal of the game in the 29th minute when he controlled Fabian Cubero's long ball forward, held off two visiting defenders and slammed his shot beyond Agustin Orion's outstretched right hand and into the corner of the net.

The goal was Zarate's fifth in the past four Primera Division fixtures and took him to the top of the goalscoring charts, while his team rose to 10 points with their goal difference of plus five putting them above of Estudiantes (10 points, plus two).

In Rosario, Martin Luque struck in the 32nd minute to give Colon victory.

The shock early leaders in Argentina - Colon have never won the Primera Division - have won four of their five games in the Torneo Final campaign to sit on 12 points at the top of the standings.

San Lorenzo could have joined Colon on 12 points but lost 1-0 at River Plate on Sunday to drop to sixth.

Bottom club Quilmes claimed their first win of the campaign with a 1-0 triumph over Tigre, while Gimnasia La Plata overcame Godoy Cruz 2-0.

In other results, Olimpo won 1-0 over Lanus, Belgrano defeated Atletico Rafaela 2-1, Racing drew 1-1 with All Boys and Argentinos Juniors claimed a 2-0 victory against Arsenal.