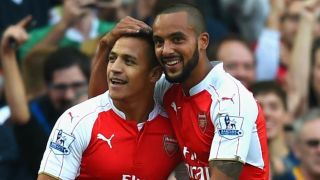 Arsenal turned in a devastating first-half performance to storm to a memorable 3-0 Premier League win over Manchester United.

Goals from Alexis Sanchez and Mesut Ozil in the space of 74 seconds gave Arsenal a 2-0 lead by the seventh minute at the Emirates Stadium on Sunday and Sanchez scored his sixth goal in three matches with an emphatic third in the 19th minute.

Petr Cech returned for Arsenal following Arsene Wenger's controversial decision to rest the goalkeeper for Tuesday's 3-2 Champions League defeat to Olympiacos, but the selection decisions made by his opposite number Louis van Gaal are now set to fall under the spotlight.

Van Gaal dropped Morgan Schneiderlin to accommodate Michael Carrick in midfield, but a soft United centre was repeatedly exposed by a rampant Arsenal, while Matteo Darmian was hooked at half-time for a second time this season, having switched to right-back to accommodate Ashley Young in the other full-back position.

Wenger's men showed no sign of hangover from their midweek capitulation, pressing the visitors deep into their own half from the kick-off, and United crumbled under the pressure in just the sixth minute.

Ramsey slotted a nicely weighted pass down the right channel for Ozil to cut back from the byline and Sanchez beat David de Gea to the ball to net an impudent backheel.

The Chile forward had the audacity to repeat the trick a minute later – his instinctive flick releasing Theo Walcott to speed past Daley Blind and cross for Ozil to double the advantage.

There was little evidence of United's heads having cleared when Arsenal clinically delivered another telling blow.

Walcott picked out Sanchez 25 yards from goal on another sweeping attack and the ex-Barcelona man waltzed past Darmian's weak challenge before sending a blistering strike into the top corner.

It should have been 4-0 when Sanchez lofted a cross to Ramsey at the back post but the unmarked Wales international horribly misjudged his close-range volley.

Cech was a virtual spectator for his team's brilliance but he made a telling contribution a minute before half-time, saving with his left leg after Anthony Martial took advantage of Per Mertesacker's slip.

Van Gaal understandably opted for a double change at the interval, with Antonio Valencia and Marouane Fellaini replacing Darmian and Memphis Depay, who both endured halves to forget.

There was greater poise about the visitors after the resumption but Ozil fizzed an effort narrowly wide after his 52nd-minute free-kick came back off the wall.

Wayne Rooney, who displayed clear frustration when he was booked for a petulant foul on Ozil, was the next United player to extend Cech with a bouncing drive.

The ex-Chelsea man then came out with authority to thwart Bastian Schweinsteiger before Juan Mata looped a left-footed attempt over.

Substitute Alex Oxlade-Chamberlain clipped the crossbar with a neat lob in stoppage time, attempting to pile further misery onto Van Gaal's team as their run of three consecutive Premier League wins came to an end in truly chastening fashion.