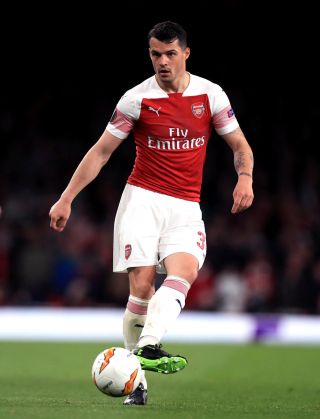 Arsenal will offer counselling and other supportive measures to Granit Xhaka as talks continue over whether he should be stripped of the club captaincy for swearing at his own fans.

The 27-year-old waved his arms, cupped his ears and told supporters to “f**k off” as they jeered him following his substitution during Sunday’s 2-2 draw at home to Crystal Palace.

Xhaka also batted away head coach Unai Emery’s attempted handshake and removed his Arsenal shirt before storming down the tunnel.

He has held three meetings with Emery since but the club are putting the player’s welfare ahead of any quick decision over whether he remains as skipper or not.

The PA news agency understands counselling will be offered should Xhaka decide on such a course of action, with Emery describing the midfielder’s mood as “upset, devastated and very sad”.

It is also believed the outburst was a reaction to cumulative issues which have built up over time, including social media posts targeting Xhaka and his family.

His wife Leonita set her own Instagram profile to private after receiving abusive messages aimed at her husband, while Xhaka himself raised a few eyebrows by changing his profile picture on the platform from one where he is sporting the Arsenal armband to an image of him captaining Switzerland.

It is understood Xhaka has been made aware by the club of the benefits of offering an apology but he is so far not in the right frame of mind to do so and is keen for any subsequent acknowledgement of wrongdoing to be genuine.

Spot the difference on Granit Xhaka's Instagram profile – one from this morning, the other from now…#AFCpic.twitter.com/PqBRcjwXPq— Mark Mann-Bryans (@MarkyMBryans) October 29, 2019

Emery has stuck by his captain while his team-mates have rallied around him despite ongoing criticism of his ability as well as questions asked as to why he was appointed captain in the first place – albeit by a blind ballot by the whole squad.

“At the moment, I am not speaking and I don’t want to speak about that,” Emery replied when asked if Xhaka could lose the captaincy over the issue.

“Now he is upset, devastated and sad. It is not only yesterday and today. He is feeling the supporters don’t like him.

“His commitment with the club is a great commitment every time. He wants to help.

“His behaviour was perfect in training, with the group and with the club. He knows he was wrong.

“He was wrong and he feels it inside very deeply. But that is normal as a human.”

Emery admitted he felt Xhaka – who joined from Borussia Monchengladbach in 2016 – should have said sorry to supporters but insists he is not interested in receiving an apology of his own.

“I spoke to him this morning about him only, his personal moment,” added the Spaniard.

“I don’t need his apology. Because I know he is devastated, we can speak about all the situation but first it’s him.

“He is now very down and we need to support him. I don’t need his apology to me now.”

Emery revealed he had spoken to Josh Kroenke immediately after the game, with the club director making a rare visit to the Emirates Stadium, and that they had agreed between them that Xhaka was in the wrong – but he wants to see the player win back the trust and faith of supporters.

“My ideal future is to watch again Xhaka playing and every supporter supporting him,” he said.“This is my ideal. I don’t know if I can or will achieve it but this is my ideal. Also for him it’s the same but also I think we need now to be calm step by step so we can progress.

“But my idea is to achieve a big connection collectively and individually with the supporters.

“We can maybe remind some similar situations in the past for players, and they came back.

“For example, I was speaking with Hector Bellerin and he said to me that he received some criticism three years ago at Emirates Stadium in one moment because people weren’t happy with his performance and then he came back.

“The most important is to keep moving ahead, working, improving and showing and transmitting to people that if one moment they don’t like him, to work to change that situation.

“I don’t know not today how it will be in the future, the most important for me is the present.”

The present for Xhaka is being left at home for Wednesday’s Carabao Cup fourth-round clash at Liverpool, although Emery was adamant that decision had been made before Sunday’s flashpoint.