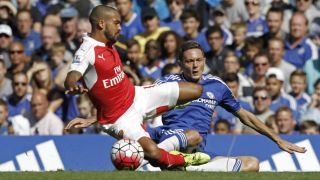 Guus Hiddink has challenged Chelsea to step up their defensive efforts as they look to extend their dominant record against Arsenal on Sunday.

The champions are unbeaten in the Premier League since the 2-1 reverse to Leicester City in December, though they have conceded five goals in consecutive draws with West Brom and Everton.

Arsene Wenger's side - who head into the weekend top of the table - have not beaten Chelsea since October 2011 in the top flight and have gone more than eight hours without a goal in that run.

And Hiddink has demanded an improved defensive display from his side as they aim to preserve that recent record and inflict a first home league defeat on the Gunners in 10 matches.

"It's not just a matter of the four defenders, nowadays if you don't defend well starting up front then you are caught," he said on Friday. "In the early days you can't be so easily outplayed tactically.

"It might be a little bit different than in the past but I'm convinced the team will give its utmost to get the result. When you start you want to have results immediately. We want full results, it's difficult to have continuously the winning mood. We have to perform now."

Wenger was infamously branded "a specialist in failure" by Jose Mourinho two years ago but has been able to watch Chelsea dismiss the Portuguese for the second time during his Premier League career after their dismal early-season form.

Yet despite Chelsea's struggles during their title defence, Wenger expects quality opposition on Sunday in what he considers a vital fixture in their efforts to win the league for the first time since 2004.

"It is another game where people look at us and see how we behave because even if Chelsea are not in the best position you just look at their squad," said Wenger.

"It is a big game because of the quality of players on the pitch and it has a big importance to us because we play at the Emirates Stadium and we know it will be important to win these types of games."

Both sides have received welcome team news heading into the clash, with Wenger confirming Alexis Sanchez could make his comeback from a hamstring injury, while Mesut Ozil (foot) should also return.

Diego Costa, who accrued a three-game ban for a clash with Laurent Koscielny in the reverse fixture, is fit to return for Chelsea, along with Belgium star Eden Hazard - though Hiddink admits the latter is unlikely to last 90 minutes.

- If Arsenal fail to score against Chelsea it will equal their longest run without a goal versus any opponent in Premier League history (six games v Liverpool 1997 to 2000).
- Guus Hiddink inflicted Arsenal's heaviest ever Premier League defeat at the Emirates (4-1 to Chelsea in May 2009).
- Three of the last four Premier League meetings between these two sides at the Emirates have ended as 0-0 draws.
- Diego Costa has scored five goals in five Chelsea appearances in all competitions under Guus Hiddink; this after netting four in 21 before his arrival in 2015-16.
- Eden Hazard is still yet to score for Chelsea this season in any competition, recording three assists in 27 games.