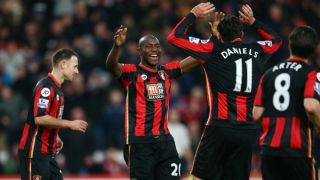 AFC Bournemouth midfielder Harry Arter said welcoming £12million man Benik Afobe was a welcome change from the days of having to wash his own kit.

Arter has been at Bournemouth throughout their rise from League One to the Premier League since signing for the club in 2010, and said just having Afobe on the park after his big-money switch from Wolverhampton was a sign of how far the team has come.

"I was here when we got promoted to League One. The fans like to remind us how dark it was - the club was in a real bad way," he said.

"When I first joined it was wash your own kit and bring your own lunch and the training ground was poor. There’s been a massive change and rightly so as it’s the least we deserve."

Afobe scored the third goal during Bournemouth's 3-0 rout against Norwich, his first since making the move up from the Championship.

His performance drew strong praise from manager Eddie Howe, who believes he has signed the right player to keep Bournemouth's bid for Premier League survival on track.

"As a player he’s got a mix of quite a few qualities of the top strikers in the past. He’s slightly different to the ones that we have but when you add him, Lewis Grabban, Callum Wilson when he gets back fit, Josh King, Glenn Murray, we’ve got some strikers there that can do some damage at this level."

Bournemouth are 15th in the Premier League, five points above the relegation zone.