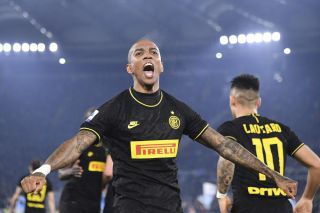 Ashley Young scored his first goal for Inter Milan but it was not enough to prevent defeat at Lazio as the Serie A title race was blown wide open on Sunday.

The former Manchester United full-back opened the scoring at the Stadio Olimpico just before half-time but a Ciro Immobile penalty and a Sergej Milinkovic-Savic strike saw Simone Inzaghi’s side clinch a vital 2-1 victory.

Lazio are unbeaten in the league since losing the reverse fixture in Milan in September and have won 11 of their last 13 Serie A matches.

This latest success saw Inzaghi’s side move above Inter and into second place in the table, a point behind leaders Juventus.

Earlier in the day, goals from Paulo Dybala and Juan Cuadrado saw Juventus returned to winning ways with a 2-0 home victory against lowly Brescia, who had Florian Aye sent off after 37 minutes.

Fiorentina won for the first time in four league games as they sank Sampdoria 5-1 at the Stadio Luigi Ferraris, where both sides finished the match with 10 men.

A Morten Thorsby own goal got the Viola going before a Dusan Vlahovic penalty and another spot-kick by Federico Chiesa, which brought Nicola Murru’s dismissal after 39 minutes, put the visitors in a strong position heading into half-time.

Although Milan Badelj’s 44th-minute red card levelled things up numerically, Vlahovic and Chiesa were both on target again in the second half to extend Fiorentina’s lead. Manolo Gabbiadini scored a last-minute consolation goal for Sampdoria.

Parma are seventh after Gervinho’s strike saw them win 1-0 at Sassuolo, Dries Mertens netted for Napoli in a 1-0 victory at Cagliari, while Udinese and Verona drew 0-0 at Stadio Friuli.

In Spain, Real Madrid are just one point clear at the top of the LaLiga standings after having to settle for a disappointing draw against lowly Celta Vigo at the Bernabeu.

Los Blancos were stunned by Fedor Smolov’s seventh-minute strike as the hosts failed to register a single shot on target in the first half. However, Toni Kroos’ equaliser and a Sergio Ramos penalty turned the game on its head by the 65-minute mark.

Madrid could not hold on for the win, though, and are now only a single point in front of rivals Barcelona ahead of the second Clasico of the season on March 1.

Sevilla missed the chance to move into the Champions League places after they had to settle for a 2-2 draw at home against bottom club Espanyol.

The visitors overturned Lucas Ocampos’ early goal to lead through strikes from Adri Embarba and Wu Lei but then had Sergio Sanchez sent off in the 69th minute. Suso levelled things up with 10 minutes remaining but Sevilla were unable to find a winning goal.

Oier Sanjurjo scored the only goal of the game after 29 minutes as Osasuna won 1-0 at Athletic Bilbao, while Leganes stay in the bottom three after a goalless draw with Real Betis, who saw Borja Iglesias sent off in injury time, and Eibar’s match against Real Sociedad was postponed.

Bayern Munich blew away Cologne with three goals in the opening 12 minutes to return to the top of the Bundesliga, winning 4-1 at the RheinEnergieStadion.

Robert Lewandowski smashed home his 23rd goal in 22 league games this season, before Kingsley Coman netted from 12 yards out – both from Thomas Muller passes.

Serge Gnabry scored twice from the edge of the area and – although Mark Uth pulled a goal back for the hosts – Bayern overtook RB Leipzig by one point to go back to the summit.

Schalke lost ground in the race for a top-four place after they were held to a goalless draw at Mainz.

Marseille won the big game in France as they strengthened their position in second place in Ligue 1 with a 2-1 victory at fourth-placed Lille.

Lille looked like moving up into third spot when Victor Osimhen put them in front early in the second half. Mike Maignan then saved Valentin Rongier’s penalty to preserve the host’s lead.

However, a Reinildo Mandava own goal and a strike from Dario Benedetto handed Marseille the win and saw them open up an 11-point gap over third-placed Rennes.

Brest are putting together a strong run at home and edged further clear of relegation trouble with a narrow 3-2 victory against St Etienne.

Goals from Paul Lasne, Gaetan Charbonnier and Irvin Cardona gave the hosts a commanding half-time lead before Denis Bouanga, from the penalty spot, and Lois Diony replied in the second half.