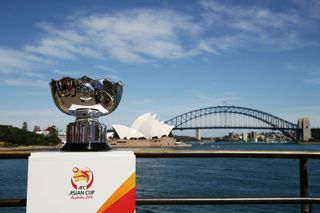 Australia's membership of the AFC has not always been welcomed by the other members but hosting the Asian Cup, which starts on Friday, provides the great southern continent with an opportunity to mend bridges.

Whether justified or otherwise, Australia have often been accused of arrogance in Asia, while other AFC members seem to resent the arrival of another powerful team in their confederation.

Having never won a major tournament - apart from the Oceania Nations Cup - many local fans will consider success in the final on January 31 as the key for Australia.

But for many pundits, including former Australia international Craig Foster, the long-term benefits of hosting the continental championships are about more than on-field results.

"The minimum [required to declare the tournament success] is for Australia to emerge in a few weeks' time with a better understanding of who we are, of the cultures that make up our region, and to demonstrate to hundreds of millions of neighbours that we have become part of Asia as an equal, neither above nor below," Foster wrote in the Sydney Morning Herald.

Australia will enter the tournament with just two wins from 11 games since coach Ange Postecoglou took over - including three losses at last year's World Cup - but past history indicates hosting the Asian Cup could set them up for a promising tournament.

In the past 15 Asian Cups, the hosts have only missed out on the semi-finals five times, while six teams have won on their home turf.

With Australia having reached the final four years ago in Qatar, losing 1-0 to Japan in extra time, Postecoglou's side will be aiming high when they take on Kuwait in the tournament's opening game in Melbourne on Friday.

The achievement of Palestine to qualify for their maiden Asian Cup appearance cannot be underestimated due to the discrimination, travel restrictions and violence they face in their homeland.

Simply putting a team together is a success for Palestine, with expats from countries as varied as Sweden, Chile and Slovenia amongst the squad.

From war-torn Palestine to ex-Soviet state Uzbekistan, isolated North Korea to modern Japan, the AFC is one of the most intriguing confederations in world football.

Australia will do well to learn each of their neighbours' stories over the next month if they are to prove themselves to be a genuine part of the AFC.