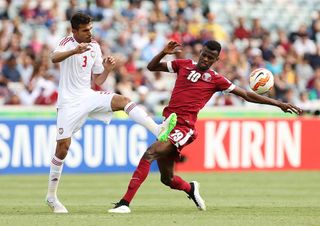 Khalfan Ibrahim gave Qatar a surprise 22nd-minute lead in Canberra before Khalil hit back with the first of his goals.

The striker's free-kick early in the second half then found the bottom corner before Mabkhout also netted twice.

Qatar goalkeeper Qasem Burhan will have to take some blame for the second and third goals his team conceded in the Group C clash.

Both teams were on the attack early, with Mabkhout firing a decent chance into the side-netting for UAE in the 10th minute.

But it was Qatar who struck first.

Hassan Al Haidos played in Mohammed Muntari, who was denied by a good save from UAE goalkeeper Majed Naser.

The rebound fell to Ibrahim and the midfielder brought it down with his chest before lobbing a stranded Naser and Hamdan Al Kamali on the goalline from the edge of the area.

UAE were almost level in the 26th minute, only for Burhan to do well and deny Khalil's header.

While UAE perhaps should have had a penalty, Abdelkarim Hassan almost doubled Qatar's lead with a powerful long-range drive that went just wide.

UAE deservedly equalised in the 37th minute, albeit in fortunate circumstances.

Qatar failed to deal with an attack and Khalil's header was cleared off the line, but that rebounded off him and into the net.

Khalil almost put UAE ahead on the stroke of half-time, but he dragged his shot wide after Abdulrahman played him in behind.

The striker's second goal arrived seven minutes after the interval.

Khalil's free-kick from just outside the the box found the bottom corner, although Burhan probably should have done better.

Another piece of poor goalkeeping four minutes later led to UAE going ahead 3-1.

Burhan spilled Khamis Esmail's long-range free-kick and Mabkhout was on hand to tap in.

Abdulrahman curled a 76th-minute chance just wide and, while Qatar pushed UAE back, they were unable to find a goal to get back into the contest.

Mabkhout sealed his team's win after a counter-attack, sweeping in an Abdulrahman pass from close range in the 89th minute.