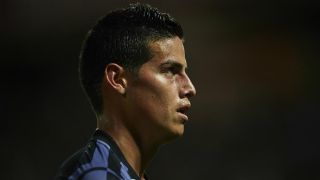 James has fallen down the pecking order at Madrid as speculation links him with a big-money close-season move to Premier League giants Manchester United.

The 25-year-old attacking midfielder arrived in the Spanish capital following a stellar 2014 World Cup, however he has struggled for playing time since Zidane replaced Rafael Benitez in January last year.

And former Colombia international leapt to the defence of his countryman, insisting James cannot play like holding midfielder Casemiro.

"They bought him because he was going to turn into a winger. You must play where you know well.

"James isn't a winger, what are you expecting on him? He cannot recover the same amount of balls than that trunk called Casemiro. You simply cannot ask that of a player like James."

James has made 21 LaLiga appearances in this season, though only 13 have been as a starter – scoring eight goals – and 30 in all competitions.

Champions League titleholders Madrid – who will face Juventus in this season's final in Cardiff next month – face Malaga on Sunday looking to claim their first LaLiga title since 2012.