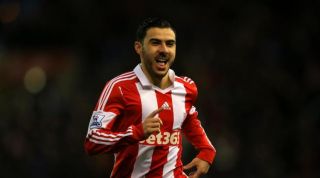 The Morocco international cut short a second season-long loan spell with Stoke City in order to complete the switch, having made just two Premier League starts at the Britannia Stadium this term.

Having switched to Anfield from Heerenveen in 2012 for an estimated £2.5 million, the winger failed to break into Brendan Rodgers' first-team plans, making 12 outings in his debut camapign on Merseyside.

Last season, Assaidi made 26 appearances for Stoke, scoring five goals, including a memorable winner against Chelsea in a 3-2 victory.

However, he could not replicate that form regularly and has struggled to get a look-in past the likes of Bojan Krkic and Mame Biram Diouf in Mark Hughes' selection.

He joins an Al Ahli side currently sat sixth in the Emirati top flight.