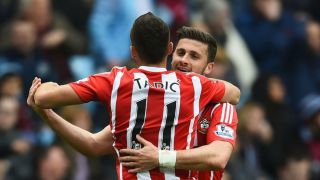 Southampton heaped more misery on crisis club Aston Villa with a 4-2 Premier League victory at Villa Park, condemning the already-relegated side to a club record sixth straight loss at home.

Shane Long hit the bar in the second minute but made amends soon after with the opening goal, heading in a glorious left-wing Ryan Bertrand cross.

Southampton continued to press and Virgil van Dijk struck the post as paper aeroplanes rained down from the home stands in protest, before Long had a goal rightly ruled out for offside.

Long then teed up Dusan Tadic for Southampton's second before Ashley Westwood pulled a goal back for the hosts just before half-time to provide some hope.

But Tadic scored again from Long's assist and after Westwood's second had reduced the deficit once more, Sadio Mane completed the scoring deep into stoppage time to cap another miserable day for the sparse home crowd.

Southampton remain eighth in the Premier League after their victory, while Villa's defeat was their 10th in a row in the league.

Graziano Pelle and Mane dropped to the Southampton bench, while Villa left out Gabriel Agbonlahor and Jores Okore for disciplinary reasons.

In the second minute Southampton opened Villa up and almost took the lead, but Long hit the bar from close range after easily beating Micah Richards and Joleon Lescott, who was booed throughout by the home support after his comments following Villa's relegation last weekend.

The opening goal arrived in the 15th minute, Bertrand bending a terrific ball into the box and Long providing a powerful headed finish.

Leandro Bacuna should have levelled the scores five minutes later but he headed Westwood's cross wide of the post.

Southampton went close to a second goal on the half-hour mark when Van Dijk hit the post from 12 yards after Villa failed to clear a set-piece.

Bacuna's poor backpass was chased down by Long and, although Brad Guzan initially denied the striker, Tadic was on hand to tap home when Long squared.

But Westwood's first Premier League goal of the season ensured Villa were just 2-1 down at the interval, the midfielder tidily finishing after a scramble in the box.

Guzan saved from Long and Steven Davis, then substitute Rudy Gestede headed over, before Southampton's third goal came in the 71st minute.

Long held the ball up well and laid off a pass for Tadic to score again, his finish taking a deflection to beat Guzan as Villa's defiant fans made their anger at unpopular club owner Randy Lerner clear.

Southampton almost had another with 11 minutes to go as Guzan spilled Cedric's cross, but Long put his shot over the crossbar.

Westwood then sparked hopes of a late fightback with a sweet finish into the bottom corner, but despite Villa pressure Southampton added a fourth on the break in injury time, the unmarked Mane heading in his fourth goal in his last five Premier League games.