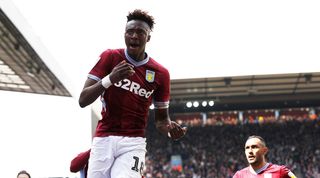 Villa came from behind to beat West Brom 2-1 in the first leg of their play-off semi-final on Saturday, with the on-loan Chelsea striker scoring the winning penalty.

The 21-year-old has been in superb form in the second tier of English football this season, scoring 26 goals in 38 league games.

Ahead of Tuesday’s second leg, The Telegraph has reported that Villa will make a move to sign the striker permanently this summer if they seal a return to the top flight.

The England international is expected to command a transfer fee of £25 million.

Leeds United recorded a 1-0 win away to Derby County in the other play-off semi-final thanks to a goal from Kemar Roofe.