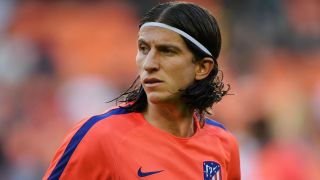 Atletico Madrid defender Filipe Luis looks set to be out of action for around three weeks after the club confirmed he has suffered a hamstring strain.

The Brazilian left-back was forced off an hour into Atletico's dramatic 3-2 win at Real Valladolid on Saturday.

Atletico announced on Monday that, following an MRI scan, the 33-year-old sustained a grade one strain.

Although the club have not set a specific return date, a rest period of three weeks is recommended after such injuries.

As such, Filipe Luis will most likely miss Saturday's visit of Espanyol and the trip to second-placed Sevilla on January 6, although he could be in contention to return against Girona in the Copa del Rey three days later.

Filipe Luis has played in 13 of Atletico's 16 LaLiga games this term.