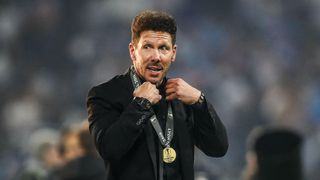 Diego Simeone defended Atletico Madrid's attritional style, stating they "haven't done much wrong" in his seven years at the helm.

Argentine coach Simeone presides over a well-organised team that focuses on making life difficult for the opposition before hitting them on the break.

However, Atletico were thumped 4-0 by Lucien Favre's forward-thinking, exciting Borussia Dortmund side in their previous Champions League outing.

Simeone is the most successful coach in Atletico's history with seven trophies since taking over in 2011 and indicated he has no intention of changing his ways after one negative result.

"Football is marvellous and there are countless ways to play and to win. You have to choose one and we believe in ours because of our players' attributes. In seven years, we haven't done much wrong," Simeone told a news conference ahead of Tuesday's meeting with Dortmund at the Wanda Metropolitano.

"Dortmund are one of the best sides in Europe at the moment – that's why they're top of the Bundesliga and unbeaten in the league and Champions League. They play spectacular football and if they keep it up, they've got a real chance of ending the season as champions in Germany.

"They were forceful [in the first match], vertical and counter-attacked perfectly. We have to congratulate them. We did good things but could not get the win.

"We hope to have a balanced game and for our strengths to show."

Atletico will again be without key trio Diego Godin, Koke and Diego Costa due to muscular injuries, but Simeone has no concerns about the long-term health of his squad.

He said: "I'm optimistic it will soon be fine with us. There will be several [players] missing, but the team is doing very well.

"The guys who are going to play are in a good moment. When you build a group you imagine situations like this."