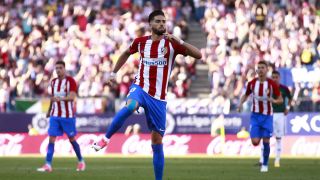 Yannick Carrasco grabbed a brace as Atletico Madrid geared up for their Champions League quarter-final trip to Leicester City with a dominant 3-0 home win over lowly Osasuna in LaLiga.

Antoine Griezmann gave Atleti a 1-0 lead over the Premier League champions heading into the second leg in midweek, but the France star was afforded the luxury of watching on from the bench in one of five changes on Saturday.

Carrasco started both games, though, and he struck the opener after half an hour as the bottom-of-the-table visitors came under the cosh at the Vicente Calderon.

Osasuna had won their previous two matches to keep their slim survival hopes just about alive, but they never looked likely to register a third straight victory and Carrasco doubled Atleti's lead shortly after half-time before Filipe Luis added a fine third goal with just under half an hour remaining.

The game ended with an almost comedic air as forgotten man Alessio Cerci made his first LaLiga appearance in two and a half years before the hosts missed two penalties in as many minutes - Carrasco seeing his chance of a hat-trick pass with the first as home fans' calls for Cerci to take a kick fell on deaf ears.

Victory keeps Diego Simeone's men in third place, four points above Sevilla ahead of their clash with Valencia on Sunday.

But the hosts soon built momentum and, after Correa and Thomas Partey had both seen strikes deflected wide, Carrasco broke the deadlock.

The Belgium international took up possession on the edge of the area, worked room for a shot and sent a pinpoint drive arrowing into the bottom-left corner.

Atleti kept pushing and Diego Godin nodded agonisingly past the right-hand post, before Fernando Torres similarly missed the target as he ran clear into the box.

Although Osasuna made it to the interval without conceding again, Carrasco grabbed his second within two minutes of the restart, ghosting in at the back post to head Gaitan's fine centre beyond Salvatore Sirigu.

A fine Atleti move then forged a chance for Fernando Torres to net in the league for the first time in over two months, but Sirigu blocked well from the forward's low finish.

The goalkeeper somehow denied Torres again when the striker stretched to nod on target, but a third goal quickly arrived.

With Osasuna still regrouping from the previous attack, Correa pushed a pass into Filipe's path and the overlapping full-back calmly placed a right-footed finish into the net.

The margin between the two sides gave Simeone the opportunity to rest further key men, with Filipe and Torres both withdrawn, while Carrasco drew a comfortable stop from Sirigu.

Loud cheers greeted Cerci's introduction from the bench and a barmy end to the game was sparked as Correa won an 88th-minute spot-kick.

Sirigu, who brought down Correa, lifted himself to deny Carrasco a hat-trick from 12 yards, but Atleti were quickly awarded another penalty for handball by Miguel de las Cuevas.

Thomas took the spot-kick this time, but Sirigu again saved brilliantly to extend Atleti's streak of missed penalties in LaLiga to an incredible six.

- Yannick Carrasco has scored more goals than any other La Liga midfielder this season in all competitions (14).
- Filipe Luis has scored three goals in his 29 appearances in La Liga 2016/17, as many as he did in his previous five seasons for Atletico (three in 159).
- Atletico have scored more goals from outside the box than any other side in La Liga this season (13).
- Yannick Carrasco is the first Atletico midfielder to score 10 goals in a single La Liga season since Maxi Rodriguez in 2005/06 (10).
- Atletico have missed more penalties than any other side in La Liga this season (six out of eight attempts; 25% accuracy).
- Salvatore Sirigu is the second 'keeper to save two penalties in the same La Liga game this season, alongisde Diego Alves, both against Atletico.