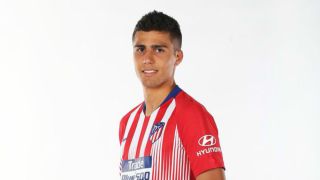 Rodrigo believes Atletico Madrid have the best squad in LaLiga and is excited to take the number 14 shirt previously worn by coach Diego Simeone.

The new signing, who has returned to the club from Villarreal five years after leaving Atleti, was presented to the media on Friday.

And the Spain international is bullish about Atletico's chances of catching Barcelona, who topped LaLiga by 14 points last term in claiming a domestic double, while city rivals Real Madrid triumphed in the Champions League.

"The club have grown a lot in the five years since I left," Rodrigo told reporters. "Atletico aspire to win everything these days.

"This club has become one of the five or six best in Europe. We go for everything, and for me this is the best squad in LaLiga and we will enjoy all the competitions.

"I am very happy, not just for returning home, as I always hoped to do. When the chance came I did not have to think for long.

"I want now to give my best. It is a big leap forward for me, and I will give everything for this shirt and hopefully win trophies, which is why I am here."

Rodrigo will take the number 14 shirt vacated by club captain Gabi following his move to Qatari club Al Sadd, while Simeone also wore the number during his time as a player at the club.

"It is a very important number for this club, the values of Simeone as coach and now manager - courage, battling qualities," the midfielder added.

"Gabi was key for the successes of this club and leaves an important gap, not just in play but in leadership, which is something I still have to learn. I'm really looking forward now to wearing this jersey.

"I want to step out on the pitch with this shirt. This is a dream come true."