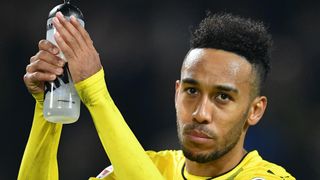 Pierre-Emerick Aubameyang is reported to have agreed a move to Guangzhou Evergrande, but Borussia Dortmund chief executive Hans-Joachim Watzke expects speculation over the forward's future to continue.

Reports emerged in China on Saturday that the Super League club had beaten rivals Beijing Guoan to the Gabon international's signature, with the fee said to be €72million and the transfer to be finalised at the end of the Bundesliga season.

This latest twist in what has been a long-running transfer saga is sure to anger Guoan if true, as the capital side had been considered favourites to secure Aubameyang's services.

Watzke refused to confirm the news, however, telling Kicker: "The speculation surrounding Pierre-Emerick Aubameyang will circle for as long as he plays here.

Aubameyang has been prolific for Dortmund since signing for the German club in July 2013, scoring 98 top-flight goals.

But the 28-year-old's relationship with the Signal Iduna Park outfit has soured this season and he has been dropped more than once for disciplinary reasons.

Arsenal were said to be among his suitors, but Gunners boss Arsene Wenger insisted a move was "not a possibility".