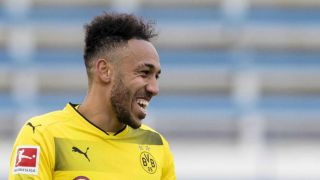 Pierre-Emerick Aubameyang shrugged off rumours he could soon move to the Chinese Super League by scoring a brace as Borussia Dortmund beat Zulte Waregem 3-2 in Marbella in a mid-season friendly on Monday.

Reports have suggested the Gabon striker has agreed a €72million move to Guangzhou Evergrande, but Aubameyang looked sharp as he helped Dortmund come from behind twice to record another friendly victory after Saturday's 2-0 defeat of Fortuna Dusseldorf.

Hamdi Harbaoui took advantage of slack defending to put Zulte Waregem ahead midway through the first half but Dortmund were only behind for six minutes, Gonzalo Castro providing the perfect corner delivery for Lukasz Piszczek to flick in an unstoppable header.

The Belgian side swiftly retook the lead with another set-piece goal, Timothy Derijck getting up highest to power home a header from a right-wing Brian Hamalainen corner.

Goals continued to flow in the first-half, however, with Aubameyang slotting past Sammy Bossut after Andriy Yarmolenko sent the striker through.

Aubameyang scored again nine minutes after the interval to win the game, breaking the offside trap and striding on to Jadon Sancho's pass before cutting inside Michael Heylen and smashing in a powerful finish, but speculation over the striker's future will continue.