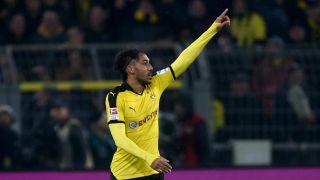 Pierre-Emerick Aubameyang is keeping one eye on chasing Gerd Muller's Bundesliga record after reaching 20 goals for the season so far.

The CAF Player of the Year scored both goals in Saturday's hard-fought 2-0 win over Ingolstadt to move Borussia Dortmund to within five points of leaders Bayern Munich ahead of their game with Hoffenheim.

Aubameyang has taken just 19 appearances to reach the 20-goal mark - a figure he had guaranteed to coach Thomas Tuchel before the campaign started - and is two ahead of Bayern legend Muller's tally at the same stage of the 1971-72 season, when he went on to score a record 40 goals.

"I still need to score 20 goals to do it, right?" he told Ruhr Nachrichten when asked about the prospect of surpassing Muller's record. "That's a lot, but in football you never know."

Aubameyang says his wager with Tuchel is not quite fulfilled, however, despite his stunning scoring form so far.

"It's true I've achieved my goal, but I haven't yet managed to fulfil my bet with the coach, you'll have to be patient," he said.

Aubameyang is three ahead of Robert Lewandowski in the scoring charts but the 26-year-old says a rivalry is not something that distracts him.

"It doesn't interest me at all whether Lewandowski is before or behind me," he said. "The important thing is that I score goals for the team and we win. It will all be tallied up at the end."

The former Saint-Etienne forward looked to be offside when he headed in Lukasz Piszczek's cross to give Dortmund the lead but he believes such decisions balance out over the course of the campaign.

"At that moment, I didn't see I was offside, I just headed the ball in. We have conceded four goals this season which were offside, so things balance themselves out."