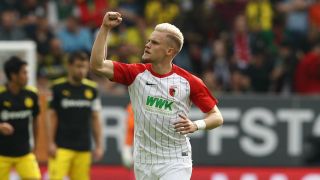 Philipp Max is keen on a move to the Premier League but expects to see out the rest of this season at Augsburg.

The left-back - a member of Germany's silver medal-winning team at the 2016 Olympics -  has reportedly attracted the attention of a host of Premier League clubs, with Manchester City, Manchester United and Liverpool among those linked as potential suitors.

Max's attacking abilities in particular have made waves this season, with the 24-year-old supplying a remarkable 10 assists in 17 Bundesliga outings.

He is under contract at Augsburg until 2022 and told Sport Bild a January move is unlikely as things stand.

"I've dreamed of playing abroad since I was a kid and I think the English league would be a good match for my straightforward style on the pitch," Max said.

"Other clubs can be sexy too, but this is a topic for the future.

"I have a contract with Augsburg. In football, you can never rule out anything but I firmly believe that I in the second half [of the season] for FCA."

Augsburg lie ninth in the Bundesliga at the halfway point of the season and host struggling Hamburg in their first game back after the winter break next weekend.