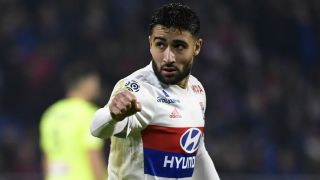 Jean-Michel Aulas believes club captain Nabil Fekir will stay at Lyon next season, despite the ongoing uncertainty surrounding his future.

Fekir, who is currently on World Cup duty with France, has caught the eye of several big clubs after an outstanding season with Lyon where he scored 21 goals in all competitions.

The 24-year-old was reportedly set to sign for Liverpool earlier in the transfer window, but a mysterious issue with the playmaker's medical led the French club to release a statement saying the move was off.

Real Madrid have also since registered their interest in the player, but Aulas thinks Fekir will now stay in Lyon for at least another season.

"Nabil will, I think, be in at Lyon next season," Aulas told RMC Sport.

"I have almost a father-son relationship with my players. I gave him the opportunity to go to Liverpool because it was his dream club.

"I did the same with Tolisso and Umtiti. He [Fekir] is our captain and it's the coach's wish to keep him."

Fekir's France are currently preparing for a World Cup semi-final showdown with Belgium on Tuesday.