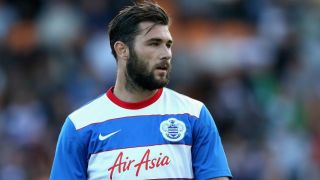 QPR striker Charlie Austin has reiterated his desire to remain at the club until the end of the season, amid interest from the Premier League.

Austin is out of contract at season's end and the Englishman has been linked with a January switch to the top flight.

But after netting a second-half brace as QPR rallied to draw 2-2 at home to Brighton and Hove Albion on Tuesday, Austin insisted he has no plans to leave Loftus Road.

"I set out at the start [of the season] and I said to Les [Ferdinand, QPR's director of football] that I'm going to be here for the rest of the season," Austin told Sky Sports.

"So I'm not going anywhere."

QPR manager Jimmy Floyd Hasselbaink added: "I think in football you can't guarantee anything. Everyone wants to make profit and at the end of the day it's a business. We have to understand that, as a manager and as a club.

"Do we want to put him up for sale? No. The club does not want to sell him. But, on the other hand, it's up to the owners. I can only advise. I can only say, 'No, I don't want him to leave, I need him'. I think they will respect that."