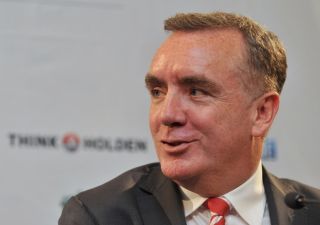 The Reds have not been involved in Europe's premier club competition since 2009-10, but are assured of a group-stage spot in 2014-15 after their impressive season that sees them on the brink of a maiden Premier League title.

And with their spot in Europe secured courtesy of a 3-2 win at Norwich City, Ayre said he is eyeing big transfer targets to bolster their squad ahead of their venture back into the Champions League.

"It has always been tougher in the transfer market when you are not competing at the highest level," Ayre said.

"We had the issue with Luis Suarez last summer because he wanted to play in the best games against the best players.

"That is always a factor. We have always been fortunate to be able to bring great players here despite that, but there is no question it opens up a few doors for us and makes it a little bit easier.

"Even when you step through that door, there are still a lot of others trying to get the same players."

Champions League football also ensures the Reds of a greater income, with an estimated £20million brought in by participating in the competition alone.

Ayre said he knew Liverpool were up against the odds at the start of the season, with fourth place originally his goal for the club.

"There is no question we always expected that the squad we need for next season will be very different to the squad that we have needed for this year when we were not playing in Europe,"

"That has always been on the cards.

"What we achieved on Sunday was massive. This isn't just about getting in the qualifiers. We are guaranteed Champions League football. It is an unbelievable achievement from where we were.

"It is what we set out for, but if you were taking bets at the start of the season, you'd have said fourth place would be a great achievement.

"Now we are guaranteed third and we are determined to push on. It is all important for what we are trying to achieve."