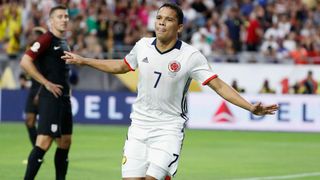 AC Milan striker Carlos Bacca claimed that a number of clubs from across Europe are interested in his signature.

Reports in England have linked West Ham with a bid in excess of £25million, while Roma have been rumoured to be monitoring his situation at San Siro.

Bacca has revealed that offers have arrived from the Premier League, La Liga, Ligue 1 and the Bundesliga, as well as approaches from rival Serie A clubs, but he is in no rush to make a decision on his next club.

"My future's in God's hands. Everyone knows I have a four-year contract with Milan," he told AS.

"There are offers and there's interest from clubs in England, Spain, Italy, France and Germany. It's not easy to make a decision.

"We have time, we're calm. My representative is speaking with clubs and with Milan."

Bacca, who has been linked with Atletico Madrid in the Spanish media, admitted that the prospect of playing Champions League football could be a major factor in his decision.

But the 29-year-old - who joined Milan from Sevilla last year - would not rule out staying put, especially if Silvio Berlusconi is able to complete the sale of the club and significant investment in the playing squad follows.

"It's my dream to play in the Champions League and I work every day for that. I want to play in it with Milan, but unfortunately we won't be doing so," he said.

"It's one of the subjects I'm talking about with Milan - that we're not in Europe and I want to play in the Champions League.

"It depends on Milan's project this year, on the new investors and the players that arrive. Then we'll make decisions."