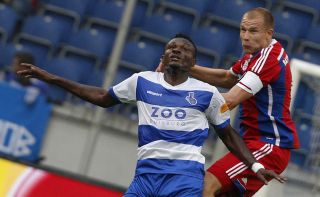 Pep Guardiola's men raced to a second successive title in record time last season and were confirmed as champions with seven matches remaining.

Before starting in Bayern's 4-1 DFB Pokal win over Preussen Munster on Sunday, Badstuber's last competitive appearance for the club came back in December 2012, when he tore his anterior cruciate ligament in a league clash with Dortmund.

Friday's opponents Wolfsburg finished fifth at the end of last season, missing out on UEFA Champions League football by one point. And Badstuber, while excited at the prospect of a return to action, is aware that Bayern must be mindful of the threat posed by their visitors to the Allianz Arena.

"I've worked towards this for a very long time and I'm looking forward to it!" he said.

"Wolfsburg are dangerous, because they've brought in a lot of potential in recent years. They have plenty of hungry players who are aiming high."

Guardiola looks set to be without a number of key men for the visit of Dieter Hecking's side.

Jerome Boateng is suspended, while Javi Martinez, Bastian Schweinsteiger and Thiago Alcantara (all knee) are out. Rafinha (ankle) is also set to miss the clash, while Franck Ribery is carrying a knock and will be absent.

﻿Edged out 1-0 in the corresponding fixture last season, Wolfsburg were soundly thrashed 6-1 at home in March.

Hecking is hopeful that Sebastian Jung - signed from Eintracht Frankfurt during the off-season - can recover from a muscular problem and help shore up his side's defensive line.

"Sebastian trained with the team again for the first time," he said. "That went very well.

"We'll have to wait and see how the muscle reacts to the added strain now. So long as there are no changes, then Sebastian will not be in doubt."

Goalkeeper Diego Benaglio remains a doubt after suffering from flu, while new arrival Nicklas Bendtner is not yet match-fit and Wolfsburg still hold concerns over the availability of former Bayern man Luiz Gustavo, following a gruelling World Cup campaign with Brazil.