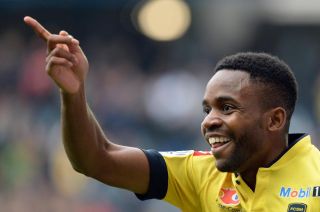 The French youth international scored seven goals in 31 Ligue 1 appearances for Sochaux last term, but has been linked with a departure following the club's relegation.

And Bakambu claims there has been interest in him from both Swansea of the Premier League and Bundesliga outfit Freiburg, in addition to Crystal Palace.

"I have offers, notably from Freiburg in Germany and in England from Swansea," he told France Football. "I am hesitating between the two.

"Reims and Lorient, I heard they were interested, but they did not contact me. Maybe they contacted Sochaux, but I don't know about that.

"I am giving myself two to three days to decide, no more. I know that at Swansea I might not be first-choice striker. There are several things to consider, not just the prestige of the club.

"But I am flattered. I'm at an age [23] where I need to play. Crystal Palace are also interested, I think it will be between those three [Swansea, Crystal Palace and Freiburg]."

Swansea have already bolstered their attacking ranks with the acquisition of Bafetimbi Gomis from Lyon, who has so far provided back-up to first-choice striker Wilfried Bony.