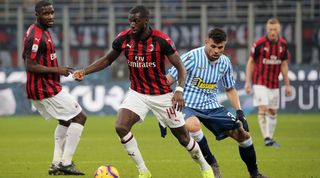 The 24-year-old joined the Rossoneri on a temporary deal last summer with the option to join permanently at the end of the campaign, and is showing no intention of wanting a return to Stamford Bridge.

Bakayoko initially struggled to adapt to Italian football, but has recovered from a difficult start to the season to become of Milan’s standout players this season under coach Gennaro Gattuso.

When asked about his future in an interview with RMC Sport, the Frenchman said: “We’re waiting for the end of the season.

“I’m under contract with Chelsea, but I’m very happy at Milan and I’d like to continue with them.

“It was difficult at the start, also because of the language. Today things are going much better, both on the field and in everyday life, and I’m very happy.

“As for the future, the objective is to finish in the top four with Milan and have a surprise: a recall to the national team.”

Bakayoko has made 19 Serie A appearances for Milan this season as they look to secure Champions League qualification, and Gattuso’s side are currently occupying fourth place in the table.

“The percentage of our wins has increased, but the whole team deserve credit,” Bakayoko said.

“We had a difficult start and for me it wasn’t easy to adapt to a new team and new surroundings.

“I think I’ve become an important player and I‘ve tried my best to help Milan get back to where they deserve to be.

“At the start I was only played sparingly and I was judged a bit too soon. When I started playing regularly, I was able to improve my performances. That’s what I lacked: continuity.”