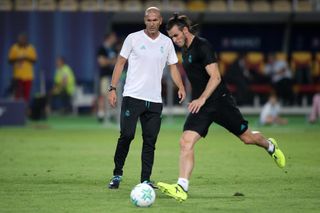 Gareth Bale returns to the Real Madrid fold for Sunday’s season finale against Real Betis but Zinedine Zidane admits he does not know if it will be the Welshman’s final game for the club.

Bale has been absent since last month’s defeat to local rivals Rayo Vallecano but coach Zidane has confirmed the 29-year-old will be back in the squad for the visit of Betis.

With speculation rife that Bale’s six-year stay in Spain could be about to end, the match may well be the last time he is seen in Madrid colours.

Zidane refused to speculate about what the summer might hold for the club’s record signing, though, saying: “He’ll be part of the squad tomorrow and that’s all I can tell you.

“You’ll see the team that we put out. I don’t know whether this will be his last game.

“We’re at the end of the season and next year there’ll be changes, but I don’t know whether this will be his last game or not”.

Bale is not the only Madrid player whose future is uncertain as the Spanish giants lick their wounds after a campaign which, aside from winning the FIFA Club World Cup in December, has been a huge disappointment.

The likes of Keylor Navas, Toni Kroos and Isco have been linked with moves away as Madrid look to regroup after failing to mount a genuine LaLiga title challenge or reach either the Champions League or Copa del Rey finals.

The 13-time European champions have already lost 11 times in LaLiga this season – their worst record this millennium – and are certain to finish third, well behind arch-rivals Barcelona and Atletico Madrid.

It has been a tough time for a club used to winning silverware and Zidane, who became the team’s third coach of the season when he returned to the helm in March, is now hoping his side can at least finish on a positive note.

The Frenchman told his pre-match press conference as reported by the Spanish media: “We want to sign off with a good performance and a win in front of our fans.

“They always win a lot of things here, and it’s very difficult when you’re not playing for anything, but we want to have a good game against a good Betis side who will also want to finish the season well.”

Betis travel to the capital knowing a victory would guarantee them at least 10th place in the table.

.@RealBetis_ensnap Real Madrid’s goalscoring streak and win at the Bernabeu for the first time in 19 years! 💪#RealMadridRealBetis0-1 pic.twitter.com/gm8YTvTQqc

They claimed a 1-0 win on their last to visit to the Bernabeu, Antonio Sanabria netting a dramatic late winner in September 2017, and coach Quique Setien is hoping for something similar this weekend.

He said on his club’s website: “It’s a very important game for us because it could allow us to gain a place in the table and leave a good memory at the end of the season at such a difficult stadium.”