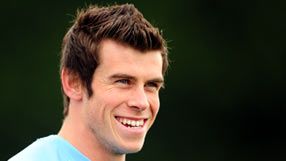 The Welsh left winger followed up his hat-trick in the 4-3 Champions League defeat at the San Siro with a spellbinding display on Tuesday night as Tottenham beat the European champions 3-1 at White Hart Lane to go top of Group A.

Bale, 21, bamboozled Inter's Brazil right back Maicon with a buccaneering performance, creating the second and third goals for Spurs who came of age in Europe's blue riband competition.

Glenn Hoddle, one of Tottenham's greatest ever players, said Barcelona and Real Madrid would join the clamour for Bale's signature although Redknapp is adamant Bale is going nowhere.

"You couldn't buy him for 25 or 30 million pounds that's for sure," Redknapp told Sky Sports News in an interview on Wednesday. "If he had a value, if we wanted to sell him, it would be way in excess of that.

"He is an amazing young player. We wouldn't entertain a bid. The chairman said he is not for sale and that's good enough.

"We are building a team at Tottenham and we are a club that's going places. The whole thing is going forward and we are not looking to sell our best players."

Bale was highly-rated when he arrived at Tottenham for 10 million pounds from Southampton in 2007 but lost form and confidence and even became a jinx for the team which failed to win in any of his first 24 Premier League appearances.

Bale was still leaving Maicon, Lucio and any other Inter player he found in his way floundering deep into stoppage time on Tuesday and looked as though he could run all night.

"It's a dream for a striker to play with him because you know that nine times out of 10 he will beat his man and deliver the ball into the danger area."

Bale's impact, although a little longer in coming, bares many similarities to that of fellow Welshman Ryan Giggs, who burst on to the scene as a teenager at Manchester United and even in