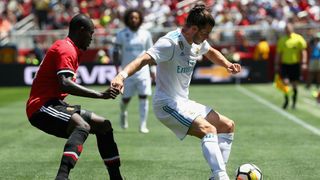 Gareth Bale is targeting a clean sweep of trophies at Real Madrid next season after speculation linking him with Manchester United was drawn to a close.

United were said to be interested in bringing the Wales star back to the Premier League but manager Jose Mourinho stated over the weekend that it would be "mission impossible" to sign him.

With the rumours around his future having died down, Bale is now focused on adding to the eight major trophies he has won in the Spanish capital since moving from Tottenham in 2013.

Asked about Mourinho's remarks, Bale told Sky Sports: "There you go - I haven't said anything."

He added: "We go into every competition looking to win it and it's no different again this year.

"We have got the motivation to do that and will be trying our hardest to win every competition we enter."

Check out some of the best photos from our opening match of this summer's against at Levi's Stadium!July 23, 2017

United beat Madrid on penalties following a 1-1 draw in their International Champions Cup clash in San Francisco on Sunday.

Bale, however, was not concerned by the result given that Madrid's pre-season has only just begun.

"It is just about getting the cobwebs out, getting some game time into us," he said.

"We would have loved to win but that's the way it goes."

Bale was spotted speaking with Romelu Lukaku shortly after the match but the 28-year-old says he was merely wishing the striker good luck following his reported £75million move to United from Everton.

"He's just signed so I just wished him good luck for the season," he said. "He's done very well in the Premier League and I am sure he will do great for them."