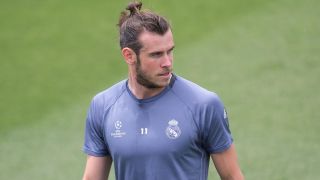 Real Madrid midfielder Casemiro is glad the decision over whether to start Gareth Bale or Isco in the Champions League final is out of his hands.

Isco has starred in Bale's place but the Wales international has declared himself fit after recovering from a calf injury.

That leaves coach Zinedine Zidane, who insisted the duo could play together, with a big decision to make for Saturday's decider against Juventus in Cardiff.

Casemiro said Madrid were lucky to have such quality, but is pleased the decision is not his.

"Isco is at a very good level and Bale is a very important player for us. I am lucky that I am a player and I don't have to choose," he said.

"The coach can only choose 11 players to start. It is a difficult decision. They can play together, but you have to ask this question to the coach.

"We are lucky to have two players of this level."

Casemiro believes a win in Cardiff would cap off the ideal campaign for the Spanish giants.

"I would say that the season, it has been almost perfect, but not totally perfect as we haven't won the Champions League yet," he said.

"I always say that this squad deserves it because we are like a family, we are very united and involved.

"Of course we have respect for the rival. But this family, which is very humble, deserves it."