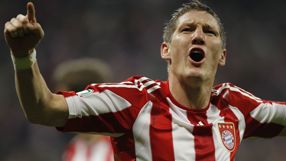 Ballack, who left Stamford Bridge to rejoin Bayer Leverkusen in the summer, had his ears pricked when Schweinsteiger recently confessed to being an admirer of the Premier League and believes his German team-mate would be particularly well suited to the Red Devils.

And with Schweinsteiger's contract at the Allianz Arena set to expire in 18-months time, Ballack believes the time could be right for the 26-year-old to move to Old Trafford to take his career to the next level, on the back of several outstanding performances at the World Cup earlier this year.

“He has taken on the responsibility placed in him and is now in a phase when he is looking to reach the zenith of his career," Ballack told Kicker.

"He took a huge step forwards at the World Cup. He has presence, authority, personality, performance and goals. He has everything."

"Only he will be able to feel what is right for him for the future. Of course every footballer is attracted to certain things and Bastian will feel these also. But there are not that many big clubs around and Bayern is one of them.

"On the other hand, Real or Man United are both attractive and he would fit in well at both clubs."

Carlo Ancelotti's Chelsea are also thought to be monitoring Schweinsteiger's situation at Bayern, as the Italian looks to rejuvenate his ageing squad over the next few years.

But the German giants remain hopeful that their star midfielder will turn down any advances from England to sign a new long-term contract in Bavaria.

Bayern's sporting director Christian Nerlinger recently told the club's website: "In regard to Bastian, the most important thing for us is that a new contract is signed.

"He has told us that we are his first option. We are not in talks just yet, we are not going to put him under any pressure."

Sir Alex Ferguson has been linked with a string of midfielders - including Sunderland starlet Jordan Henderson, Everton's Jack Rodwell and Inter Milan playmaker Wesley Sneijder - as replacements for Paul Scholes, who could leave the club as early as next summer.

Fellow midfielder Ryan Giggs, 36, is also approaching the end of an illustrious career that has amassed almost 600 league appearances in a Manchester United shirt.