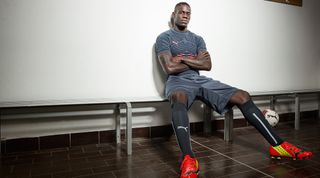 Italy knocked England out of Euro 2012 at the quarter-final stage, winning 4-2 on penalties after a goalless draw in Kiev, and the pair will meet again in Manaus on June 14 to get their World Cup campaigns underway.

Balotelli, who left City for Milan in January 2013, scored in the shootout against former colleague Joe Hart, and has fond memories of the face-off.

"What do I remember about penalties against Hart? Goal!” the spot-kick specialist, who successfully converted his first 26 career penalties, said at the launch of PUMA’s evoPOWER football boots in Barcelona.

"I am happy we are playing against England because I can see my ex-team-mates. But I am selfish when it comes to the World Cup. I want to think only about Italy. I don’t care who we play against, we have to be prepared for everyone."

Head coach Cesare Prandelli is looking to go one better in Brazil this summer after guiding Italy to the Euro 2012 final, eliminating Germany in the semis before being blown away 4-0 by Spain.

Balotelli, with 12 goals in 29 caps to his name, praised the former Fiorentina tactician, saying he gets the best out of the talent at his disposal.

"We have a good team, and we know each other very well,” he said. “Prandelli is very good with tactics so we know how to play and what to do. I think that’s why in the national team – speaking for myself – I think I have played better.

Click here for more information about the PUMA evoPOWER boots.

Can't see the video? Click here to watch in another window