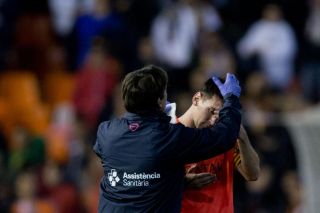 The Argentina international was hit by the object during Barca's celebrations after Sergio Busquet's dramatic injury-time goal secured a 1-0 win at Mestalla.

Referee Fernandez Borbalan booked the forward, stating in his match report that Messi had: "Delayed his return to the pitch after the goal was scored, in order to waste time".

La Liga's Competition Committee confirmed on Wednesday that the decision of the official would be upheld, prompting the Camp Nou outfit to appeal.

"It was announced on Wednesday that the Spanish Liga's Competition Committee will be maintaining the yellow card shown to Leo Messi at Mestalla," a statement on the club's official website read.

"In response to the verdict, Barcelona has decided to go to the Appeals Committee and request for the booking to be withdrawn.

"Referee Fernandez Borbalan produced the card after the Argentinian was hit by an object while celebrating Sergio Busquets' injury-time winner."

The incident drew a quick response from Valencia, who vowed to identify the supporter and issue them with a lifetime ban.