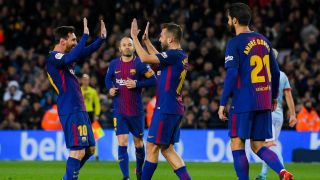 Barcelona cruised into the quarter-finals of the Copa del Rey with a 5-0 second-leg rout of Celta Vigo at Camp Nou on Thursday.

A 1-1 draw from the first match in Galicia had left the tie looking open, but a devastating first-half performance from the holders secured their 6-1 aggregate victory.

Messi netted twice in two minutes inside the opening quarter of an hour, steering home from two Alba crosses, before he returned the favour with a sumptuous pass that allowed the full-back to score his second goal of the season.

Suarez pounced on a mistake to make it 4-0 before the interval and leave club-record signing Philippe Coutinho applauding from his seat in the stands.

Celta improved a little after half-time but the damage had been done long before Rakitic's header completed the rout, meaning Barca will join Deportivo Alaves, Leganes, Real Madrid, Espanyol, Sevilla, Atletico Madrid and Valencia in the last eight.

Messi threatened twice in the opening exchanges, forcing Sergio Alvarez into one good low save, but the Celta keeper could not keep him off the scoresheet for long.

Alba's cross from the left was missed by Suarez, allowing Messi to send a fine half-volley into the bottom-right corner from the edge of the area, despite Sergio's best efforts.

Barely two minutes later, Messi had his second from yet another Alba assist, the Argentine placing a low shot into the same corner of Sergio's net after Barca's full-back picked him out near the penalty spot.

Not content with their 2-0 lead, Barca continued to push forward, with Suarez seeing a goal harshly ruled out for offside before Andres Iniesta was denied by Sergio's fingertips after a fine Messi backheel.

With 28 minutes gone, they had their third. Messi, allowed time to walk with the ball at his feet, played a stunning long pass into the path of Alba, who beat Sergio on the stretch to finish high into the net.

3 - Jordi Alba has been involved in three goals in the same game for the first time for Barcelona in all competitions (one goal and two assists). Jet. January 11, 2018

Celta looked in disarray and they gifted Barca their fourth three minutes later, with Pione Sisto passing straight to Suarez 12 yards out, allowing the striker to fire home.

With the tie effectively at an end, Valverde took the chance to give Messi some rest, replacing his number 10 with Ousmane Dembele just before the hour mark to deafening applause from Camp Nou.

Nelson Semedo, a livewire down the right, twice created chances for Suarez to make it 5-0, with the Uruguay striker just missing his first cross before rifling his second over the bar.

Suarez almost capped the win with a spectacular chip from 40 yards, with the ball just sailing wide of the left-hand post, but Rakitic added gloss to the scoreline three minutes from time with a firm header from Dembele's corner.