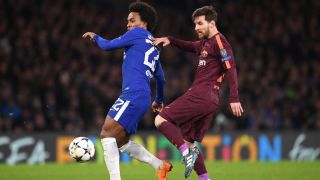 Barcelona are still as fearsome as ever even without Neymar, according to Chelsea attacker Willian.

Willian's 62nd-minute strike was cancelled out by Lionel Messi as the teams played out a 1-1 draw at Stamford Bridge in the first leg of their Champions League last-16 tie.

His Brazil team-mate Neymar may have left Barca for Paris Saint-Germain last year, but Willian said the La Liga leaders were still hard to beat.

"I think Barcelona are Barcelona, with or without Neymar," Willian said.

"Of course Neymar is a great player but they have Messi, they have [Andres] Iniesta, they have [Luis] Suarez.

"They have really good players so Barcelona is always Barcelona."

While he opened the scoring, Willian also struck the post twice during Tuesday's clash.

The 29-year-old still believes his team can reach the quarter-finals with a result at Camp Nou on March 14.

"Of course, we can go there and do a great job again. It will be a completely different game," Willian said.